Random International: Everything & Nothing

Yuz Museum Shanghai presents “Everything & Nothing,” Random International’s first solo exhibition in Asia. The exhibition encompasses new works alongside established pieces of pivotal significance within the artists’ practice. The exhibited works consider ideas of simulation, decision-making, and automation in an immediate and sensory way.

A London-based, multi-disciplinary collective, Random International explores the human condition in an increasingly mechanised world through emotional yet physically intense experiences. The artists aim to prototype possible behavioural environments by experimenting with different notions of consciousness, perception, and instinct. The exhibition continues this path of enquiry; each of the works generates its own environment, to which visitors are invited to respond on their own terms. Random International strives to “invite visitors to re-experience and re-examine the physical spaces that represent our relationship with technology. These spaces relate to both lived and speculative perceptions of an increasingly automated environment, and how natural phenomena and human behaviour can shape the world.”

Everything and Nothing
2016
6’27”（looped）
Courtesy of the artist

The exhibition takes its title from the video installation, Everything and Nothing (2016), which attempts to pose essential questions about humankind’s place in a technological dynamic. Random International’s first work to be realised through video alone, Everything and Nothing documents the simultaneous decay and progress of the industrialised world in an age of relentless transformation. The steamroller expresses an inherent ambiguity within a culture of un-tempered innovation; it has the potential to compact and fragment, to destroy and enable renewal. Random International’s newest work Turnstiles (2018), exhibited here for the first time, also focuses on this interrelation between humankind and machine, but purely through analogue means. A maze of barrier gates, Turnstiles has no digital component, the interaction is born solely from merging mechanical and human movement. The unexpected grouping of familiar objects creates an environment in which visitors can explore their own instincts and kinetic responses. In a playfully surreal manner, the work explores the physical presence of networked systems and how they relate to human presence. A further highlight of this solo show is the light sculpture Self and Other (2016), which forms part of the collection of Yuz Foundation. The piece invites unexpected physical interactions with the reflected image, while exploring traits of human cognition. The visitor is met with their own illuminated reflection, encased in sheets of glass to create a multi-layered mirror. The reflection echoes the visitor’s movement and behaviour, but with a slight delay. In so doing, Self and Other invites a unique relationship with the self-image; it is neither the live reflection of a mirror nor the static image of a photograph fixed in past time, but rather occupying an ambiguous place somewhere in between. The work emphasises questions of human identity, and how it might be altered by life, today and in the future. 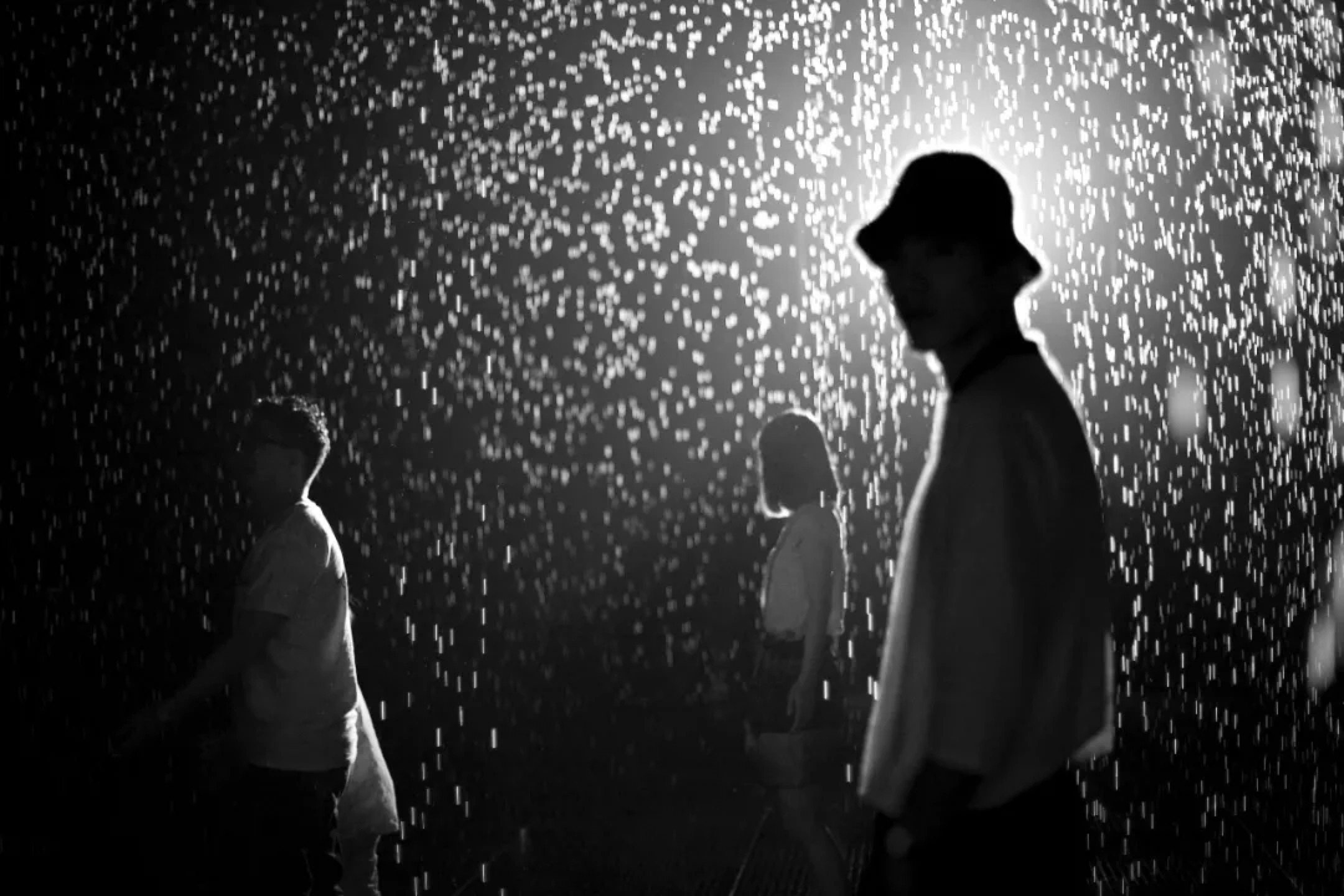 Rain Room
2012
Courtesy of the artist and Yuz Foundation

The exhibition marks the return of Rain Room (2012) to Yuz Museum, following its debut in Asia in 2015. This is the first time that Rain Room will be shown alongside other works by Random International. Part of Yuz Collection, Rain Room is a field of perpetually falling water that participants can explore whilst remaining dry. Human presence prevents the rain from falling, creating a unique atmosphere and exploring how human relationships to each other and to nature are increasingly mediated through technology. Rain Room is also in the collection of the Los Angeles County Museum of Art, where it was exhibited in 2015/16, following exhibitions at the Museum of Modern Art, New York (2013), and London’s Barbican (2012). An edition of Rain Room will become the first permanently installed artwork at the Sharjah Art Foundation (UAE) in 2018, and be housed in its own building. At 150 square metres, Yuz Foundation’s Rain Room is the largest iteration that the artists have created.

The exhibition will open in the afternoon, April 20th. For more information about the artist talk and related public events, please refer to our social media and official website.

Random International is a collaborative studio for experimental practice within contemporary art. Founded in 2005 by Hannes Koch and Florian Ortkrass, the studio now includes a larger team in London and Berlin. Questioning aspects of identity and autonomy in the post-digital age, Random International’s work invites active participation.

In 2017, their work Zoological debuted at London’s Roundhouse as part of Wayne McGregor’s +/-Human. The studio’s work has also formed part of the Lichtsicht Biennale (2015), Ruhrtriennale (2013), and Moscow Biennale of Contemporary Art (2011). Solo presentations of their work were exhibited at Lunds konsthall, Sweden (2014), Carpenters Workshop Gallery, Paris (2012), and Pace Gallery, New York (2016). Their work is in the collections of MoMA, Yuz Foundation, LACMA and V&A, where their Swarm Study / III is on long-term display.