Yuz Museum is honored to present the exhibition from the collection of Yuz Foundation, Will / We Must by artist Zhou Tiehai, from July 11th to August 27th, 2017. The series of works Will / We Must consists of a video and fourteen paintings, which will be exhibited together as a whole for the first time, providing the public with significant moments during the development of Chinese contemporary art. 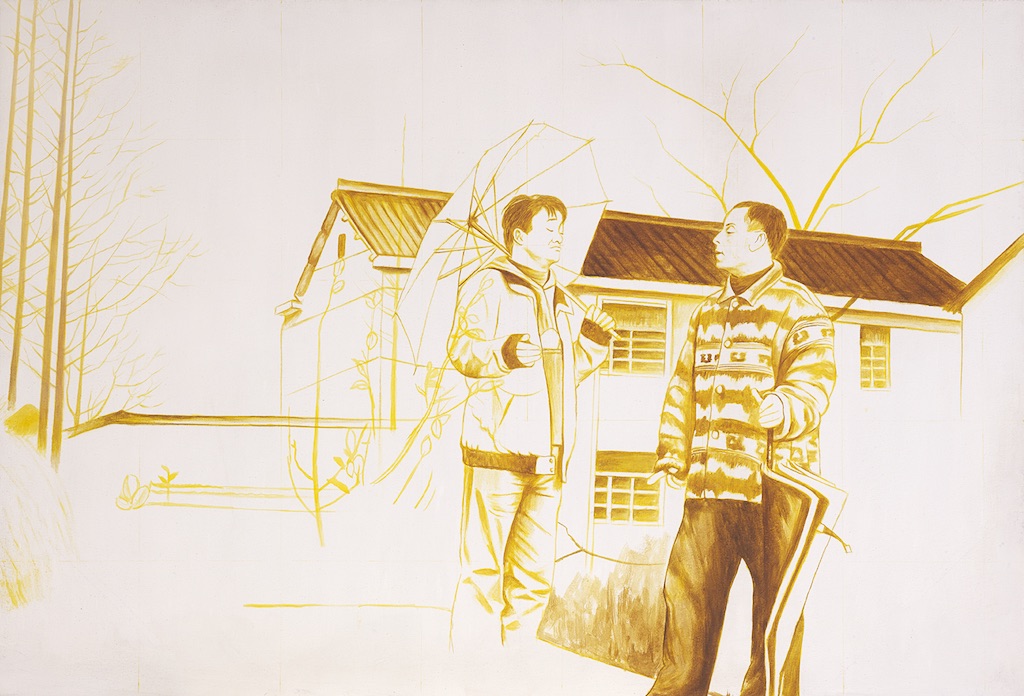 Filmed during 1996-1997, Will / We Must is a 35mm black-and-white silent video. It contains 9 acts and lasts 9 minutes and 17 seconds, reflecting Zhou Tiehai’s true feelings and thoughts on Chinese contemporary art as an insider and observer. Several years after the video was completed, Zhou successively created a series of airbrush paintings on cheap and easily acquirable materials such as old newspapers and non-woven fabrics, trasferring the scenes of the video into paintings. The multi-color paintings own more vitality compared to the black-and-white moving images, just like still frames in the memory. This exhibition will also be the first public presentation of the 14 paintings since they have been created.

As Zhou’s only video work, Will / We Must was extremely experimental at that time regardless of form or contents. It is also a significant documentation in Chinese contemporary art history. For over twenty years, its plots and dialogues still have an extraordinary vitality. His work serves an important research value for the perceptions and communication between Chinese and Western culture, and continues to have its realistic significance until this present day.

A number of survey exhibitions based on the collection were held at Yuz Museum, including “Myth / History: Yuz Collection of Contemporary Art” in 2014, “Myth / History II: Shanghai Galaxy” in 2015, “Overpop” in 2016, and other Yuz Project Room exhibitions, etc. With the support of Yuz Foundation and its collection, Yuz Museum has always been adhering to the initial concept of “Being established in Shanghai and facing the world; Collecting but not hiding, sharing for all.” Taking Chinese contemporary art history as the clue and finding out its development through collecting has always been one of the primary directions for Mr. Budi Tek’s collections. This concept is also one of the most important characteristics of the museum’s exhibition programs. By presenting this exhibition, we hope to share the art works as a particular case with the audience and have them to experience the “scene”, evoking more reflection, discussion and research on Chinese contemporary art.

The exhibition is made possible with the support of Yuz Foundation.