Chengliang Cai focused on creating the infinite animation in stallations from 2015. “Due to the obsession with ‘the unavoidable infinite circulation of life’, I hope these artworks could be presented in an unattractive but ubiquitous way.” Said by Chengliang Cai. Chengliang Cai’s works include video arts, films, photographs, drawings and installations. Through his artworks, Cai focuses on topics like politics, history, city, revolution, Sci-Fi, also the boundary between dreams and reality, what’s more, how individuals deals with all these challenges. 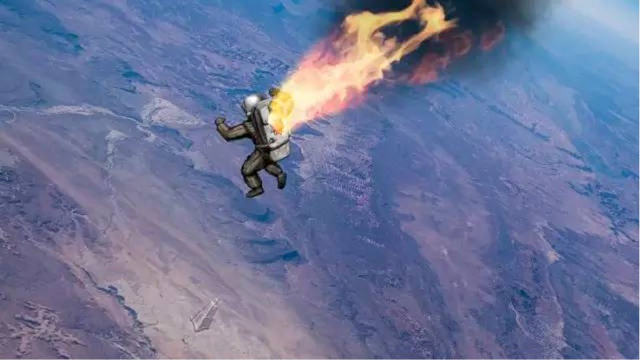 Screen shot from “The Fall of Icarus”

The installation Yuri’s Endless Journey and The Fall of Icarus are Chengliang Cai’s new artworks in 2016. ‘Yuri’ in Yuri’s Endless Journey is the first name of Yuri Gagarin, the first human being in space. In 1961, Gagarin took the USSR spacecraft, Vostok 1, and entered the earth orbit. In the animation, the statue of Gagarin flies through stars, nebulas and galaxies, toward a beam of mysterious light. His journey seems to be without end. I believe this is a metaphor of the ambition, desire and faith of human civilization. Despite all our nobility and greatness, humans are lonely. We have to complete this journey alone. No matter how hard we tried, we probably will never be able to touch the ultimate truth of the universe, either. Like this close loop of animation, we must go up, which means higher, faster and stronger, till the end of time; and there is no other choice for us. In Greek methodology, Icarus is the son of the great craftsman Daedalus. Icarus attempted to use his father’s artificial wings to escape from Island Crete. As he flied too high and too close to the sun, the wings broke down, and he fell into the sea. In my animation, Icarus is a USSR astronaut, whose backpack is burning and falling continuously toward the earth. He falls through clouds and winds, but somehow never finally reaching the ground. If what we see in the animation is only the statue of Gagarin, could this falling astronaut be Yuri himself? There are no answers. The rise and the fall is a critical discourse in philosophy. But what if falling is not an easy movement of self-destruction; what if falling is actually an endless process of self-deconstruction, just like how the world works today?

Come on 16th April and you are ableto talk with Chengliang Cai face to face. You will also have the chance to see more animation installations created by Chengliang Cai in Yuz Museum.

Chengliang Cai was born in 1984, Shanghai, China. Now lives in NYC, US. His works include video arts, films, photographs, drawings and installations. He studied Photography, Video and Related Media in School of Visual Arts in USA, 2014 and got the Bachelor degree of Art History in Fine Arts College of Shanghai University, 2007.